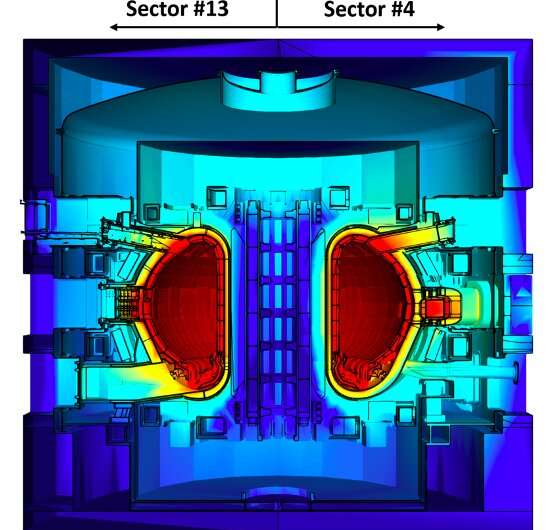 According to Phys.org Tokamaks, devices that use magnetic fields to confine plasma into torus-shaped chamber, could play a crucial role in the development of highly performing nuclear fusion reactors. The ITER tokamak, which is set to be the largest nuclear tokamak in the world, is particularly likely to shape the way in which nuclear reactors will be fabricated in the future. ITER is a highly complex technology that uses entirely new strategies, which means that those building it are confronting challenges that have never been faced before. To facilitate the design and operation of the ITER tokamak, scientists worldwide have been conducting what are known as nuclear analyses, which are aimed at theoretically examining its outcomes and potential. Click here for this document free acces

So far, nuclear analyses based on data gathered by the ITER reactor have relied on detailed but partial models that only represent specific parts of the tokamak. However, these models present limitations and unquantified uncertainties that become evident as the design of the machine advances. Those related to its safety and operation are of particular relevance. With this in mind, researchers at Universidad Nacional de Educación a Distancia (UNED) have recently developed E-lite, a detailed and realistic Monte Carlo N-particle transport (MCNP) model of the ITER tokamak. This model, presented in a paper published in Nature Energy, has the potential to dramatically improve the reliability and precision of nuclear analyses assessing this magnetic fusion device.

“Due to the computational limitations of a couple of decades ago, the ITER neutronics community worldwide, including ourselves (the TECF3IR research team at UNED), have so far been working using partial models of the ITER tokamak,” Rafael Juarez, one of the researchers who carried out the study, told Phys.org. “Since then, however, computer power has evolved significantly. Furthermore, in recent years, the computational codes that we use have undergone advances as well, some of them enabled by TECF3IR.”

The development of more advanced computers and more sophisticated codes has ultimately enabled the creation of increasingly realistic and complex tokamak models. Over the past few years, therefore, researchers worldwide have introduced a number of new partial models to be used for nuclear analysis. Alternatively, simplified models of the full machine were considered, as well, depending on the application. Nonetheless, none of these models captured a full, detailed representation of the machine, which engineers desired to ascertain the safety and operation quality of reactors with high levels of confidence.

“By September 2018, at UNED, we were working on improvements for few partial models in collaboration with ITER Organization and Fusion for Energy and we connected the dots: We realized that we were already in the position to change the approach, rather than improving it,” Juarez said. “I would say it was an accumulation of evidence over the years that somebody just needed to link, in order to realize the implications of the tremendous advances made by the whole community over the past years. This inspired us to create a full model of the ITER for nuclear analysis. We tried it, and it worked.”The MCNP model devised by the researchers is largely inspired by previous partial models, including the so-called C-model. Partial models were conceived to be unkept and tailored by users for specific applications.

The new model is arranged in a block structure, with modular parts representing specific components of the ITER tokamak. To develop it, the researchers unfolded the block structure of the previously devised C-model in seven instances, covering 280 degrees of the tokamak, then added a detailed representation of the remaining 80 degrees, which contained the tokamak’s neutral beam injectors. Subsequently, they adjusted and revised the model to ensure that it also accounted for some of the machine’s asymmetries.

“The blocks were filled with the latest available MCNP representation of specific components of the machine,” Juarez said. “Representations of symmetric components, like diverter cassettes, were repeated, while the rest, like diagnostics port plugs, appears in single instances. In general, we can say that E‑lite is largely a mosaic of models properly ordered and keeping the philosophy of its predecessors to stand as a maintainable and tunable model.”The key difference between the model devised by Juarez and his colleagues and previous ITER tokamak models is that it does not need boundary conditions to represent the entire device. On the other hand, the new model captures the full geometry of the device, including the asymmetries that shape the radiation fields. Previous models did not account for these asymmetries, which was a source of uncertainty and led to unreliable results.

“Uncertainties in nuclear responses of the ITER Tokamak associated to the use of partial models can now be estimated,” Juarez said. “Alternatively, nuclear analysis can be conducted directly in E-lite to avoid this uncertainty. This affects every quantity in general to a different degree, some of them as relevant as the nuclear heat of the superconducting coils, the shutdown dose rate for in‑situ maintenance or calibration of the radiation detectors that will measure the plasma power.” Juarez and his colleagues proved that creating a full, heterogeneous MCNP model of the ITER tokamak is now computationally viable. In addition, they showed that such a model would be significantly more reliable and accurate than existing partial models.

The model could soon be used to conduct nuclear analyses, allowing researchers to evaluate the possible safety and reliability of reactors with greater certainty. In addition, this recent study could inspire other research teams worldwide to devise MCNP models of other complex nuclear systems.”At TECF3IR we have two lines of work, the first of which is related to improving the methods and tools used for nuclear analysis,” Juarez said. “We are currently working on a tool to translate from CAD to MCNP (GEO-UNED) and new variance reduction techniques to accelerate the determination of shutdown dose rates in the Monte Carlo approach. We are also working on new and more accurate methods to determine the time evolution of radioactive inventory of fluids subjected to irradiation, of relevance in dozens of applications.”

In addition to devising better tools for nuclear analysis-related research, the researchers are currently conducting highly precise nuclear analyses for nuclear facilities worldwide. They thus plan to continue collaborating with the ITER organization, as well as other teams working on nuclear technology worldwide. “We are also working on diverse projects under the umbrella of the EUROfusion consortium: (i) the IFMIF‑DONES facility, a special particles accelerator for fusion-related research, with a long-lasting collaboration of high relevance for us, (ii) JET (Joint European Torus) the most powerful nuclear Tokamak in operation nowadays, with unique activities such as the experimental validation of codes in fusion environments, (iii) the design of the future European reactor DEMO, in which of course, we plan to continue to be involved,” Juarez added.