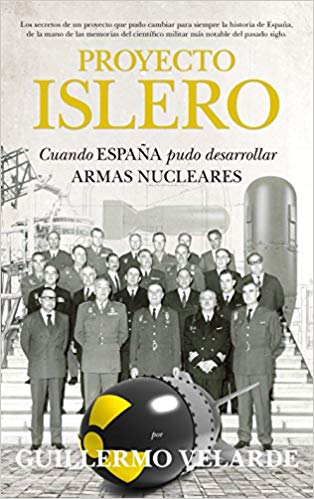 The book Proyecto Islero. Cuando España pudo desarrollar armas nucleares (Editorial Guadalmazán, 2016) explains the development of a nuclear deterrence force that took place in Spain between 1963 to 1966 and from 1974 to 1978.

Guillermo Velarde, professor chair of Nuclear Physics of the Polytechnic University of Madrid, nowadays emeritus; general of division of the Corps of Engineers of the Air Force in the reserve, and president of the Institute of Nuclear Fusion, after half a century has given to know historical facts with the rigor that characterizes his work.

The book is written with descriptive character and divided into nine chapters in temporary period until our days. Chapter one explains the Palomares nuclear accident as he personally lived it and with a special memory to the exemplary behavior of its inhabitants. Chapter Two explains the Islero Project. Chapter three tells of the interview with General Franco. Chapter four explains the academic and military training of the author. Chapter five is devoted to memories in the United States during his training in nuclear physics and engineering and his work in one of the US nuclear reactor manufacturing and project centers. This chapter also tells the days of the crisis of Cuban missiles. The importance of dual-use technology and the new threats to National Security in the 21st century are set out in Chapters 6 and 8. Chapter Seven explains how Islero Project is re-launched and the Directive for its compliance signed by the President of the Government Carlos Arias Navarro. Chapter eight tells of the interview with Prime Minister Adolfo Suarez and the support of successive Joint Chiefs of Staff to advanced scientific research at the Institute of Nuclear Fusion until 1994. Finally, the necessary scientific research leading to the production of an affordable, eco-friendly and sustainable electric energy explained in chapter 9, gives this book a varied and enjoyable reading.

NORCLA code was developed at the Institute of Nuclear Fusion. It was the first unclassified integrated code that allowed the calculation of inertial fusion that was classified by the nuclear countries. The publication of the code was a great international impact and a recognition of the high level work of the Institute, which, from that moment, received the request of collaboration of numerous international centers: Kernforschungzentrum of Germany; Japan Laser Technology Institute; l’Ecole Polytechnique de Lausanne (Switzerland). The Institute of Nuclear Fusion also signed important agreements with the Lebedev Institute of Physics in Moscow directed by Nicolai G. Basov, Nobel Prize in Physics for the co-discovery of laser, and numerous international collaborations with the IAEA and US National Laboratories.

Apart from the topics mentioned above, the book Proyecto Islero. Cuando España pudo desarrollar armas nucleares, contains valuable information on the analysis of nuclear proliferation in countries that had initially joined the Nuclear Non-Proliferation Treaty (NPT). Issues such as nuclear and radiological terrorism, the effects of nuclear weapons and nuclear war, and the use of green light lasers to neutralize missiles and satellites are also discussed.