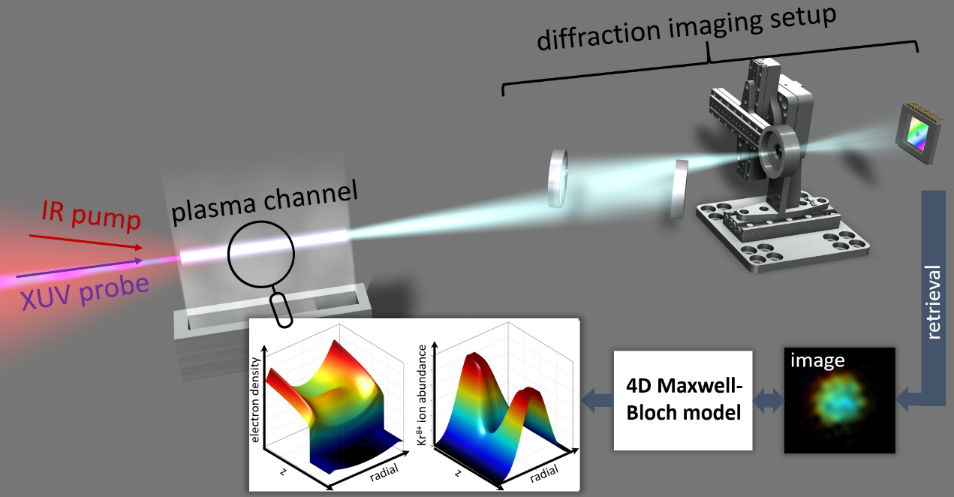 Ionized matter, or plasma, is the most abundant known state of matter in our universe (rays, ionosphere, stars, accretion disks, etc …) and has important technological applications (fluorescent tubes, plasma cutting, nuclear fusion, etc. …). Understanding this state of matter is crucial to optimizing applications and unlocking the secrets of the universe. However, it is a complex task since, although it is easy to create plasmas in the laboratory, studying their properties remains a challenge.

In an article published in Light: Science & Applications, Eduardo Oliva and Pablo Martínez Gil, researchers at the Instituto de Fusión Nuclear “Guillermo Velarde”  (IFN-GV), of the ETSI Industriales of UPM , publish in collaboration with French groups (Institut Polytechnique de Paris), Germans (Friedrich Schiller University Jena) and Americans (University of California Berkeley) direct observation of the ionization state of a dense krypton plasma. This has been possible thanks to the creation of a multiscale computational paradigm in IFN-GV from codes developed at the same institute and in other leading laboratories. These codes will make it possible to create plasmas with very specific density, temperature and ionization conditions in experiments.

A summary of the article can be found on the website of the Universidad Politécnica de Madrid and on the madri + d portal of the Comunidad Autónoma de Madrid.